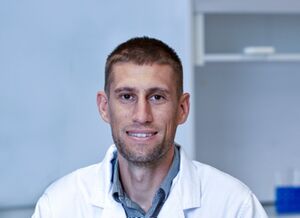 I am a researcher based at Murdoch University, Perth, Australia and specialise in metabolism and phenomics applications in healthy ageing and dementia. Specifically, my research interests lie in identifying the systemic metabolism that underpins disease risk. I’m particularly interested in the complex interactions between genetics, lifestyle, and environment and how these interactions influence the chance of developing neurodegenerative conditions and dementias including Alzheimer’s disease.

Previously, my research in the metabolic phenotyping has taken me to university research teams in the UK (King’s College London, Imperial College London) and Spain (Universidad CEU, Madrid) before arriving at Murdoch University in October 2019. I specialise in metabolic phenotyping and metabolomics using mass spectrometry, including both discovery and targeted workflows. I enjoy working and continued development of skills across the complete pipeline; from mass spectrometry method development, raw data acquisition, data pre-processing and multivariate and univariate statistical data analysis. In 2021 I was named one of the American Chemical Society’s Rising Stars in Metabolomics and Proteomics for my research.

I am passionate in public outreach programs and the communication of research, and I have been involved with social media campaigns for dementia charities, including the Dementia Revolution London Marathon campaign, and have appeared on ABC Perth Radio, Pint of Science and multiple SciComm podcasts, including the Naked Scientist and Avid research.

I first started down the path of metabolomics during my PhD research in 2009. My research aim was to identify blood-based biomarkers of Alzheimer’s disease. Before my PhD, I had already had some experience in analytical chemistry and small molecule LC-MS, and the PhD project had access to an LC-QToF-MS, so it was a natural fit that kicked off a metabolomics and lipidomics journey!

I’m currently based in Australia. I moved over from the UK in 2019 to help set up the Australian National Phenome Centre (ANPC) in Perth. Since I have been here, I have been working on building up metabolomics mass spectrometry methods and creating new collaborations, both nationally and internationally, as the centre goes through its formative years. My primary research interest in metabolomics remains in the neurodegenerative space, specifically - studying the mechanism and metabolism of neurodegeneration. The aim of this research is two fold; first, can we identify early mechanistic pathways that contribute to disease; and second to build an understanding of the wider impact of neurodegeneration on systemic metabolism. A recent interesting project that highlights this is the application of mass spectrometry metabolomics to serum collected from models of traumatic brain injury, with the aim to identify possible blood-based prognosis predictors of injury.

3. You are actively involved in neurodegenerative disease-related research, such as Alzheimer's and dementia. What are the advantages of involving metabolomics in this field?

Our knowledge of Alzheimer’s disease is rapidly advancing all the time, but there are still some major gaps – particularly in our understanding of those who are most at risk of developing the disease and why they develop it. Although we now are adept at identifying genetic risk factors, how those risk factors translate to disease incidence and detailing the mechanisms that underpin them often remains unclear. Metabolomics gives us the opportunity to investigate this from a metabolic pathway and mechanistic viewpoint. I think over the coming years we will see much more research investigating the specific metabolic mechanisms of genetic and environmental risk of disease. This will really help us build the specific pathways that influence disease and the subsequent mechanistic picture as to why certain individuals go on to develop the disease and then perhaps we can then modify these pathways, and delay the progression of disease.

4. You often use urine or serum as the samples for untargeted metabolomics studies for phenotyping Alzheimer's and dementia diseases. What are the challenges in translating the results found using this kind of samples into a more local understanding of the nervous system once samples like CSF and brain tissue are very unavailable?

This is certainly a huge challenge in the field – and something that is really interesting to consider when performing such research. Typically, such analysis reveals systemic changes, rather than direct metabolites of the neurodegeneration itself. The challenge to unpick these patterns that we see in the data and determine if they are in anyway causative factors in the disease or if they are a response to disease pathology itself. One such way we can attempt to address this is to work on longitudinal cohorts, and to study the metabolism of “healthy” populations, before they develop neurodegenerative diseases. By retrospectively looking at this data in combination with up-to-date current clinical data of the participants diagnostic outcome, we can try to observe metabolic patterns in populations that could indicate those who later go on to develop neurodegenerative conditions.

5. Would you mind sharing any interesting findings in the application of metabolomics in neurodegenerative disease?

We collaborate with a group in Singapore who are interested in the influence of the gut microbiome on the host neurological system. We recently helped them by applying mass spectrometry metabolomics platforms to measure specific plasma metabolites. The project was able to demonstrate that these metabolites, secreted by gut-microbes, go on to influence adult neurogenesis. The data indicates that a symbiotic gut–brain coregulatory axis exists, connecting the metabolic status of gut microbes to the control of neurogenesis in the brain. The gut-brain axis is a really interesting area of research, and the concept that the microbes in our gut can influence our neurological system, mood and even regulate neurogenesis is fascinating.

I think data integration will become a hot (hotter?) topic in the field, both in terms of combining metabolomic data from cohorts from around the world to create larger datasets to combining different omic techniques, for example, metabolomics, microbiomics, genomics. To achieve this we will need early career researcher contributions in a variety of areas at every stage of the pipeline. For example – we will need analytical chemistry experts who specialise in the analytical platforms and data acquisition, as we will need robust and reproducible data that can be translated to collaborating groups. We will also need researchers who can contribute in the bioinformatics of such projects - to combine and match data from different cohorts, and then work on integrating data acquired from the different omic technologies. By achieving this we can build giant datasets, and mine them to finely detail the mechanism of systemic diseases. Also, research into the metabolism of the human microbiome will grow (more!), we’ve already touched above on the gut-brain axis, and I think that research into host-microbe interactions at a metabolic level will be hot topics going forwards, as will combining these datasets and interpreting the interactions at a metabolite level through metabolomics, and the subsequent impact and influence on disease, will be a fascinating research area.